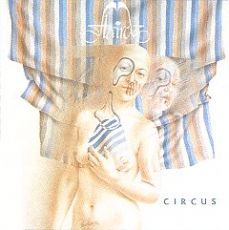 The fourth record has tempted us, after travelling around in the business for some years, to write a suite about the circus, because we were slowly changing into an (instrumental) circus ourselves. The Crossing tells about the journey from Europe to America. The Cooke Circus was the first to cross the ocean with 40 artists, 42 horses and 14 ponies. During this voyage a girl was born, called Oceana. She later became a famous ropedancer. The Circus starts with a view inside an empty tent, after which the actual show starts. It is opened by an instrumental circus orchestra with a central theme that is used later on to join 4 important acts, in which each time a solo instrument performs. This first act is a solo mortale on the twelve-string guitar. The jugglar plays a central part in the second act, in which the bass guitar is assisted by tabla's. In the break, provided by the street organ "De Arabier", you can turn the record to side B. In the third act the flute steps forward in a dance on the rope. The violin plays the clown in the fourth act and finally the circus orchestra plays the central theme again in the parade. Dedicated to Thomas Visser. In Struggle for Life the cavalry enters the ring.
Sergeant Major Astley started the modern circus. After quitting the army he gave performances with daring horse-acts. Around 1770 he extended this with clowns and rope-dancers, accompanied by a circus orchestra.