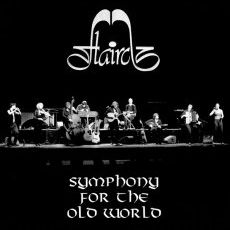 Recorded by Hans Visser in the winter of 1999 in Holland on Tascam DA-88; produced and mixed by Erik Visser assisted by Hans Keizer; mixed and mastered on Protools; mastered by Janek Horzinek.
CD 1CD 2

It has always been a wish of ours to travel the world with a large orchestra of musicians from every corner of the earth, using all the strange instruments that were created in different places throughout history. An orchestra where talented musicians from all points of the compass touch down for some time, combining their knowledge and love for their own music with each other. "Symphony for the Old World" is a first step in this direction. It is a two-hour theatre-concert in four parts, based on combinations of original and traditional themes from the North, West, East and South of Europe. It is performed by nine musicians: five members of Flairck are joined by a Scandinavian violinist, a Romanian cembalon player, a Flamenco guitarist and a Celtic piper, four soloists from the corners of Europe.

Composed and arranged by Erik Visser and Ben van den Berg, based on original themes and traditional European music. Improvisations by Roelof Rosendal (The West), Marius Preda (The East), Mirella Pirskanen (The North) and Eric Vaarzon Morel (The South).