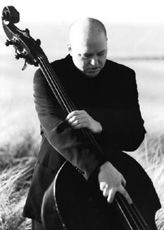 Born in 1971 in Tettnang (Germany). Started playing the violin at the age of six. When he was seventeen he started to play the bass and soon performed regularly in the local scene.
Feeling attracted to the thriving Dutch jazz scene, he came to The Hague in 1993 to study at the Royal Conservatory in the Hague with Hein van de Gein, Frans van de Hoeven and Jacques Schols. Besides performing with well-known jazz musicians as Ack van Rooyen, Philip Harper, Ben Herman en Jarmo Hoogendijk, Jens is also involved in several other projects, like the "European Jazz Project". He worked with Marius Preda, the Annette von Eichel Band, the Bob Wijnen Trio. From 2001 Jens is working with Flairck.
After many CD-recordings, a large number of tours throughout Europe and South-East Asia, working with the Radio 1 Show "NCRV Hier en Nu Nieuwspoort"-band and appearances in many other radio broadcastings, Jens now holds a stable position in the Dutch jazz scene.