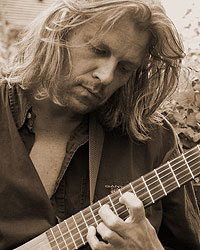 Erik Visser is undoubtedly one of Holland's most acclaimed acoustic guitarists, but 'One Man Parade' is Erik's first solo production. Over the past 25 years he has been working on theatre productions with his band Flairck; the group released 20 albums and played nearly 2000 concerts in all corners of the globe. Until now there has been little time for his solo work, but now, 40 years after he started to play the guitar, Erik will realise his long-term ambition to concentrate on the art of acoustic solo guitar playing.

The recent release of 'One Man Parade' demonstrates Erik's skill and diversity as a musician. On the album he plays 6, 8 and 12 string guitars as well as the unique resonance guitar. He plays both his own compositions, as well as arrangements of music you would not expect to hear on guitar. Erik lived in Ireland for many years, and this is reflected in the striking Irish instrumentals which can be heard on the album.

Erik has recently started the 'One Man Parade' tour, and each concert incorporates anecdotes and stories about the significance of the pieces. 'One Man Parade' is not only a great guitar performance, but also a personal and humorous story. 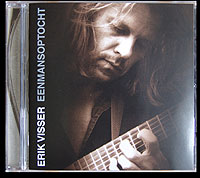 It is over 40 years since I took my first (rhythm) guitar lessons in the village pub in Ulvenhout, in the south of Holland. Shortly after, I began studying classical guitar with Ben Ludemann, now a well known Dutch musician and a great teacher. Many years later I travelled to Ireland where I came across a different style of playing during the many pub music sessions I attended. I fell in with a large group of musicians that scoured the country looking for places to play.

I always planned to record a solo album, however since my Irish busking days I have been working with the group Flairck; the last 25 years have brought 20 albums, nearly 2000 concerts, and little time to concentrate on solo work. Flairck decided to celebrate its silver jubilee by taking a break, which has allowed me to re-focus on where it all began: the guitar. I have lived in both Ireland and the Netherlands and this album clearly reflects both of these contexts.

Ironically I found it took much longer to create an album with one musician than with many. When the Gods wish to punish us, they answer our prayers!

Produced and mastered (48 bit-96Khz) by Erik Visser, Austerlitz, Holland, 2004.
Photography by Laurent Hayvel, Paris (front) and Frank Miller, Dublin (inside back).
Other photography, text, translations and layout by Erik, Tom and Anna Visser.

Erik Visser was born in Jakarta, Indonesia, however the Visser family moved back to Holland when Erik was just three years old. He grew up in the south of Holland, close to the Belgian border. He started guitar lessons when he was nine in the local village pub using his father's old jazz guitar. A year later Erik began guitar lessons with classical guitarist Benny Ludemann and played in a mandoline orchestra conducted by his teacher.

Erik left school in 1970 and studied architecture at the University of Delft until 1975. During this period he started a band called Golliwogg, and toured with other musicians. During an Irish tour with Irish-American singer Coleen Kelly, Erik met Antoinette Hensey. Antoinette and Erik married in 1977 and moved to Holland where they had two children, Anna and Tom.

Between 1977 and 1982 Erik studied musical theory and composition with Wim Witteman of the Conservatory of Utrecht.

In 1978 he established the group Flairck with his brother Hans, flautist Peter Weekers and violinist Judy Schomper. The group quickly became successful and Erik, who had by then moved back to Ireland, toured all over the world with the band.

In 1985 Erik Visser wrote and produced the album "Tired and Emotional" for the Irish singer Mary Coughlan, who became very successful in Ireland and internationally. He worked with Mary on six further albums. Erik has also produced for Gavin Friday and several Dutch artists including the young gipsy band Basily.

Flairck remained the most important initiative in Erik's career and over the last 25 years he has been both the musical and organisational director of the group, which has played nearly 2000 concerts and released 20 albums.

Erik's first musical influences were classical (guitar) music and sixties pop music. Later he became interested in traditional music from different parts of the world, particularly Celtic folk music; he has long mourned the lack of a Dutch traditional music. Having travelled widely Erik has been exposed to a wide variety of musical instruments, and has collected and studied many of these, including the Indian sitar (which he tried to introduce into Irish folk music), the Greek bouzouki, the English dulcimer, the American banjo, the Chinese pipa, the south American charango and the Turkish saz. Erik has been primarily interested in acoustic instruments and owns a collection of over 60 instruments including a complete Indonesian gamelan, a copy of a medieval hurdygurdy-organ, a glassharmonica, theremin, viola da gamba, harpsichord and many 4, 6, 8, 10, 12 and 24 guitars and other stringed instruments.

Influenced by east European folk music, and modern classical composers such as Stravinsky and Bartok, Erik often incorporates uneven rhythmical patterns in his compositions. His melodic lines and harmonies are reminiscent of classical and traditional European music. His longer compositions such as the violin concerto "Variations on a Lady" and the guitar concerto "Fight with the Angel" are often classically structured. He has also written several large compositions with 'film-like' themes, which have been used in Flairck's theatre productions, such as The Parade, The Golden Age, Chambers, and Circus Hieronymus Bossch.

Erik also made arrangements of traditional melodies from Lebanon (Arabesques), Ireland, Chile, Belgium, Israel and Japan, as well as arrangements of classical works of Bach, Händel and Vivaldi. He has written music for five short films, as well as the music for an opera which tells the story of the last 100 years of Dutch history.

Erik has composed songs and music for a number of artists including George Moustaki, Maggy Reilly, Mary Coughlan, Herman van Veen, Ramses Shaffy, Alexandra van Marken, and Natalia Rogalski. Dance companies such as Introdans (Holland) and the Idaho Dance Theater (USA), have used his music for ballet productions. He developed the idea of Cuerpos Tocados (music for the human body) for the large Chilean audio visual production Cuerpos Pintados.

Erik has composed numerous solo guitar pieces and in 2003 recorded his first solo album, "One Man Parade". During the 2004-2005 season he will tour Holland with this album. He intends to continue to work as a solo artist, as well as with Flairck, in the future.