Anouk was born in Belgium. She started playing the violin at the age of 4 and by the age of 12 she was already a member of the “Kinderorkest van Vlaanderen”.

Very quickly she started developing a taste for Folk music and eventually she would become the founder of the band Falafel, with which she won the “Balrally” of 2007 organized by the Belgian Boombal and Muziekmozaiek organizations. Then in 2009 her band Broes was formed, which would be chosen “best new-comer” of the year in 2010 by Folkroddels. With this band she would also win the “Dranouter Rootsrally” in 2013, following a tour in Belarus (2013), China (2013-14) and Hong Kong (2014). Around the same period, during 2012, she was also part of “The Ghent Folk Violin Project”, under the lead of Wouter Vandenabeele.

Anouk has a broad interest in music styles, with special emphasis in Folk and Jazz music. In 2011 she started studies in Jazz violin at the “Conservatoire Royal de Bruxelles” with Francoise Derissen and, in 2015, she entered the “Artez Conservatorium” in Arnhem (The Netherlands), where she did Master studies in Jazz and Pop music with Michael Gustorff and Jasper LeClerq. Anouk got her Master’s degree in 2018 and got also the opportunity to do Erasmus studies at the “Didier Lockswood School” in Damarie-Les-Lys (France).

Until today, she remains a very active musician. She has participated in several recordings, concerts and tours with many re-known artists from Belgium and abroad, and is currently cooperating with several projects such as the Duo De Schepper-Sanczuk, among others. She is also a teacher at the “Muziekpublique” in Brussels and at the “Stedelijke Academie” of Genk (Belgium).

Since 2019, Anouk became a member of Flairck, adding her creativity and talent to the new formation of the band. 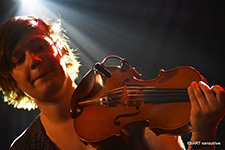 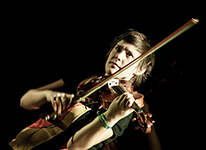 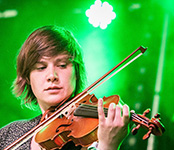