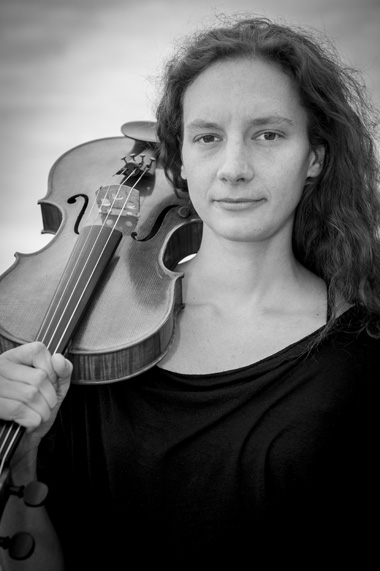 Liesbeth Lambrecht started her musical career on the classical violin. After finishing her violin studies at the Conservatory in Antwerp in 2005, she kept on looking for challenges and started concentrating on the viola. In the classical field, she played as a soloist with orchestra in the Atterberg Suite, and she is freelancing in orchestras as the National Orchestra of Belgium and the Flemish Opera.

Liesbeth is mostly known outside the classical world. She is a member of Aranis (acoustic chamber rock), with whom she recorded 7 albums. Since 2004 she toured with this band around the world with concerts in Europe, America and Japan. She is also responsible for the artwork of the third and the fourth album.

In 2008, while being on tour with Aranis, she met the progressive rock drummer David Kerman on a festival in Portugal. He joined the band in the program Roqueforte. This was the start of a good friendship and cooperation in other projects like Present, a Belgian progressive and experimental rock group led by Roger Trigaux. The group is known since 1979 for its complex and dark heavy rock- and chamber music. In 2015 the instrumentation was extended for the first time with an electric violin. She also inspired David to reviving his band 5UU’s, for which he composed new music, with violin and viola this time.

Since 2012 Liesbeth immersed herself in the wonderful world of tango music with the group Astor. They recorded the album En Bruselas in 2014, in which they have a look at the Argentinean tango from a Brussels perspective. In this band she plays violin, viola but also the ‘Stroh-violin’, a violin without resonance box but with a horn. Since 2015 she also plays in the Orquesta Tipica Belgica, a traditional tango-orchestra based in Antwerp.

Since she met folk  violinist Wouter Vandenabeele in 2015, the two like to work together as well. She became a member of Olla Vogala and played violin and viola on the anniversary concert of the band which was recorded live in Gent in 2016.

She is a regular guest in Sweden with the progressive rock group Isildurs Bane since 2011. She recorded the string section on their last album, which is presented in November 2016 on the 40th jubilee concert where she joins with full string quartet.

Liesbeth also works continuously in contemporary music projects. She plays violin and viola in Tiptoe Company, since 2016 an ‘ensemble in residence’ with the Antwerp based production company ChampdAction. Furthermore, she freelances from baroque over progressive rock to contemporary classic and tango music.

Since 2016 Liesbeth also joins the new Flairck, adding her virtuosity and experience to the brand new line-up of the band. 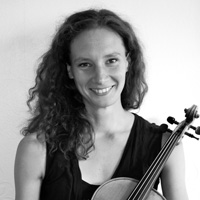